5 Reasons an All-Girls School is Like Jail: My experience watching Orange is the New Black 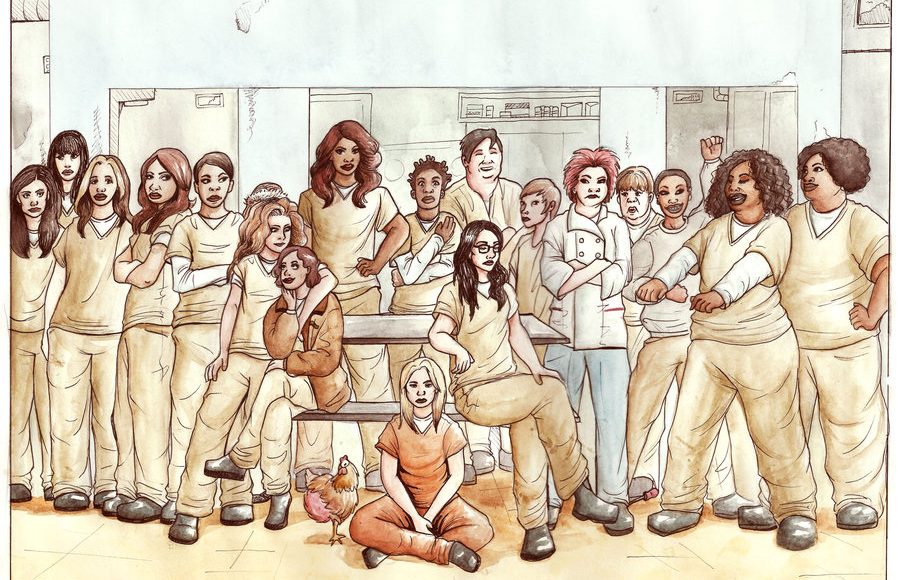 When Netflix launched Orange is the New Black in July 2013, my Facebook feed was taken over by quadruples of “you MUST watch this show” and “it TOOK OVER MY LIFE” posts. I decided to defy the aggressive caps-lock users and instead re-watch New Girl for the third time.

Then I read Lauren Morelli’s article on her experience being a first-time staff writer on the show, and it struck me that this show was important to her beyond her job, but as a woman.

I knew already that I would like it. Maybe I would even love it and rewatch it immediately. But her article made me wonder if it would mean something to me as an alumna of a women’s college.

…Which I loved, by the way. I should make that clear. A women’s college is not literally like jail. For one, I paid (and am still paying) handsomely to attend my college, and they’re in jail for free. Ba-dum-cha.

There is definitely something special about an environment where only women are living and working together that is difficult to describe, let alone put down on paper and translate into a television show. And continuously, OITNB has captured those details.

For instance, how all friendship and politics revolve around the cafeteria and those who run it.

This authentic point of view makes sense, since Piper Kerman, the author of the book the show is based on, and the inspiration for the main character, is a women’s college grad herself – a Smith alumna.

She wrote in the memoir that the same “feminine ethos” was present in both institutions, which translates to “empathetic camaraderie and bawdy humor on good days.”

“Single-sex living has certain constants,” she said, “whether it’s upscale or down and dirty. At Smith College the pervasive obsession with food was expressed at candlelight dinners and at Friday afternoon faculty teas; in Danbury it was via microwave cooking and stolen food.”

Here are some of the other ways an all-girl’s school is kind of like jail:

There are never any shortages, so they’re used for many creative, and usually boring purposes. Roommate spilled and there are no paper towels to be had? Boom. Playtex has you covered, girl.

At Litchfield, the prison on OITNB, pads are used for everything from flip-flops to a prop in a Michael Jackson impression.

Apparently, much like prison, no one goes to an all-girls school by choice.

Inevitably when you tell someone, the politest response most people can think of is “Oh,” long and drawn out, their voice running up and down musical scales like it suddenly explains something puzzling about you.

It can also be used a space filler until they can think of something to say next that isn’t “why?” or a lesbian-related question.

Depending on who that person is, they will somehow imply that you go to school with (and subsequently are) sluts, lesbians or bookish plain Janes.

Because this is a women’s college, and those are the categories that we fall into, right?

It’s not going to be as diverse as a jail, but there are girls of all different backgrounds, religions, races and sexualities, with differing opinions on everything from Taylor Swift to who our next president should be — and FYI, Hillary is another women’s college alum.

That’s just a statement of fact, not pushing an opinion on anyone. I’m not crazy, I know I’m on the internet.

When boyfriend does arrive, just like in jail, there are visitation hours.

At my school, they were called parietals. Both men and dogs were listed in the student handbook as having to follow them.

You might feel like you’re missing out by not going to school with guys…but only for a second. You hug it out with your best girlfriend, no one makes a lame hot lesbian joke* and you realize that all-girls schools are the best.

*YOU are, of course, allowed to make hot lesbian jokes. They’re hilarious. They’re only lame if a lame dude makes them – it’s the transferable property of lameness.

In Nora Ephron’s 1996 commencement speech at her alma-mater Wellesley College (one of the seven original women’s colleges – the “Seven Sisters”) she mentions how girls in her day got nicknames like “Winky.”

At Litchfield, they get very literal — Red, Crazy Eyes, Black Cindy. There’s even a nickname generator where you can find out what your Litchfield nickname is.

Nicknames are a necessity, even if it’s just someone’s last name. A fun game is calling out a name like Megan or Brittany across a quad full of women and watching all the heads turn.

The only time I have ever gotten “I will cut you!” mad in my life was twice: once when someone stole my brand-new carton of ice cream out of the freezer, and another time when it was my Lean Cuisines.

You don’t mess with a girl’s freezer foods, yo.

When Crazy Eyes gives Chapman some food after she is shunned to starvation, you see how the simple offering of food means so much. At my school, if someone saved a fresh baked cookie from Miss Tina for you — BFF status.

Another fun fact: many jails and schools (including mine) use the same company, Sodexo. So you and Litchfield could very well be having the same Taco Tuesday or confusing “Classic Turkey Noodle” soup.

The point here is simple: Women are awesome, and getting a group of us together is awesome. Mostly because of the powers we get from syncing up our menses like that.