In the Dragon Ball universe, there is no one like Vegeta. Deposed prince turned villain despot turned hero, ally, family man, and defender of Earth. His character growth is nothing short of exponential. Vegeta remains by far the most dynamic, most developed, and well-rounded character in the show.

[Get the FunkoPOP! Vegeta Action Figure]

Vegeta is complex, and the multi-layered nuances that define him reveal a flawed and a very angry individual. The fascinating and very relatable way by which his character is allowed to transform and develop has ignited the imaginations of very talented fans, who have gone on to show their love and appreciation for everyone’s favorite angry Saiyan prince with beautifully created fan art full of possibilities.

From illustrations, to cosplays, to parody manga, here are 127+ pieces of our favorite Vegeta-inspired fan art. We’ll be adding to this as we find more as well…

This typography fan art by Reddit user insaiyane weaves words to create an image of the Vegeta that we know so well – a scowl, a fist of defiance, and thunder eyebrows. Our favorite thing about this fan art is that it uses words and phrases that describe Vegeta. It also contains some of his most memorable quotes (over 9000!) in the show.

Zecar Garcia’s fan art gives Vegeta a lethal and menacing aura that reminds us that he’s a hero who has not entirely forgotten how it is to be bad. It’s also superbly rendered, and we applaud the effort and devotion that went into the creation of this fan art.

I made a thing for you all. pic.twitter.com/zFWPuk6A5l

Who else knows Vegeta more intimately than his voice actor? We are extremely happy (and tickled pink, to be honest) to have Christopher Sabat create his own Vegeta fan art which celebrates the Saiyan prince’s way of expressing his love and affection for wife Bulma on Valentine’s day. 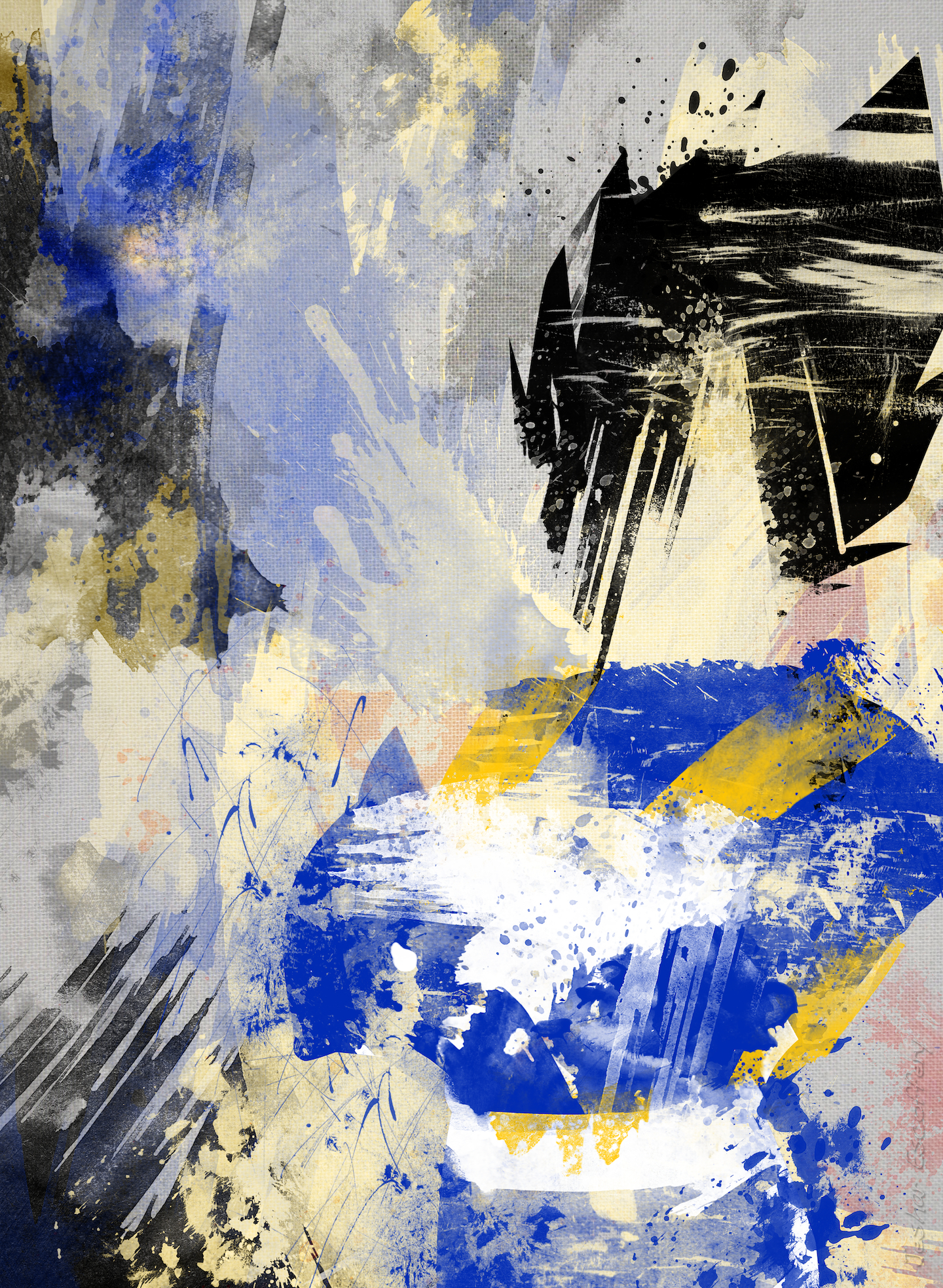 With its bold splashes of color and deft strokes, this fan art by Jeshar Escoferry exudes energy and dynamism – two things that define Vegeta as a character. It’s an abstract style of art, but there’s nothing abstract in the clarity that this fan art expresses his restlessness, his drive, and his constant need to move forward. 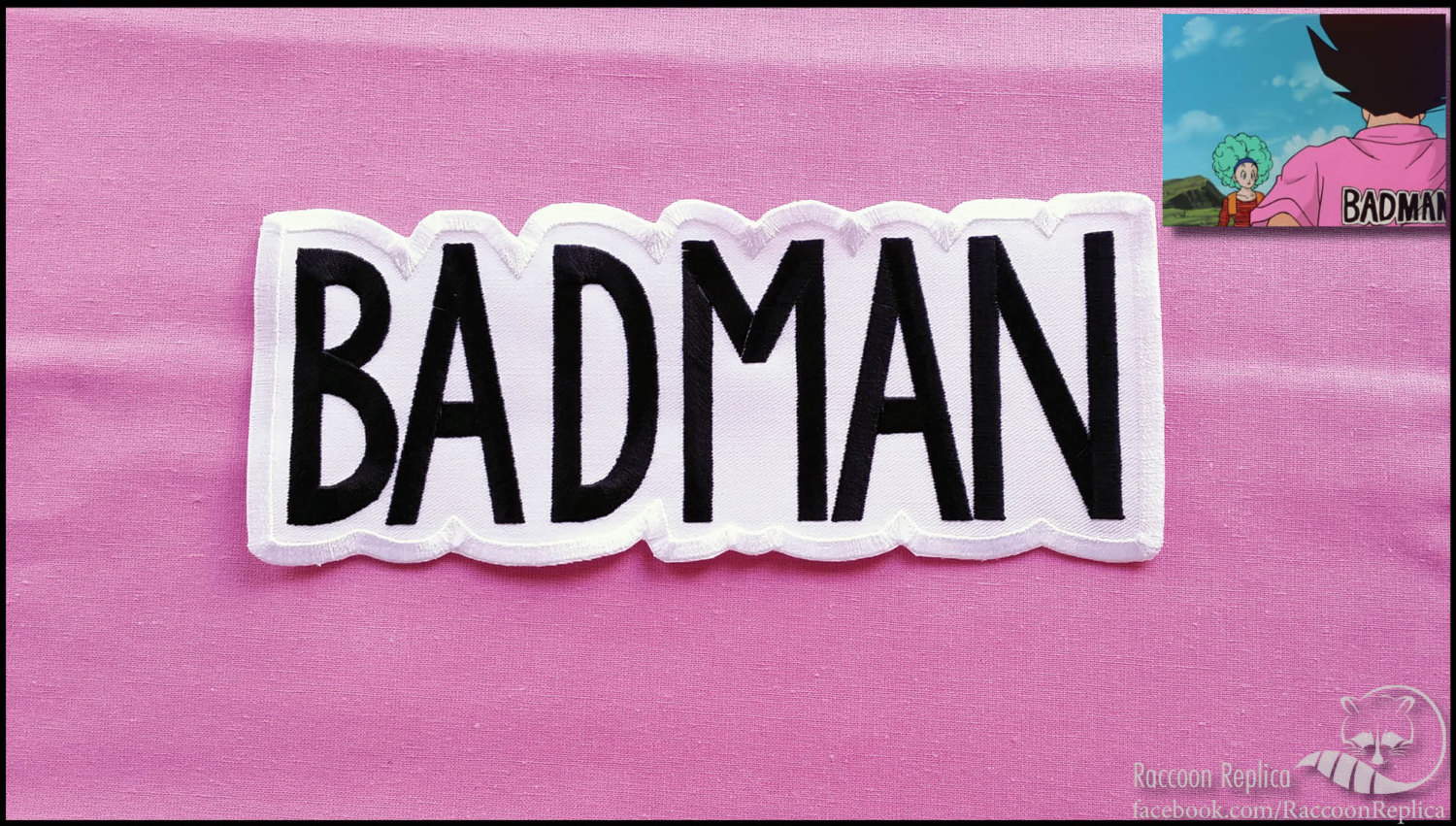 At one point in our lives, we all wanted to be Vegeta. While we will never attain Vegeta’s power, his glare, or his swagger, with Etsy user RaccoonReplica’s Badman fan art patch, we can at least be able to copy his bold and unapologetic fashion sense. 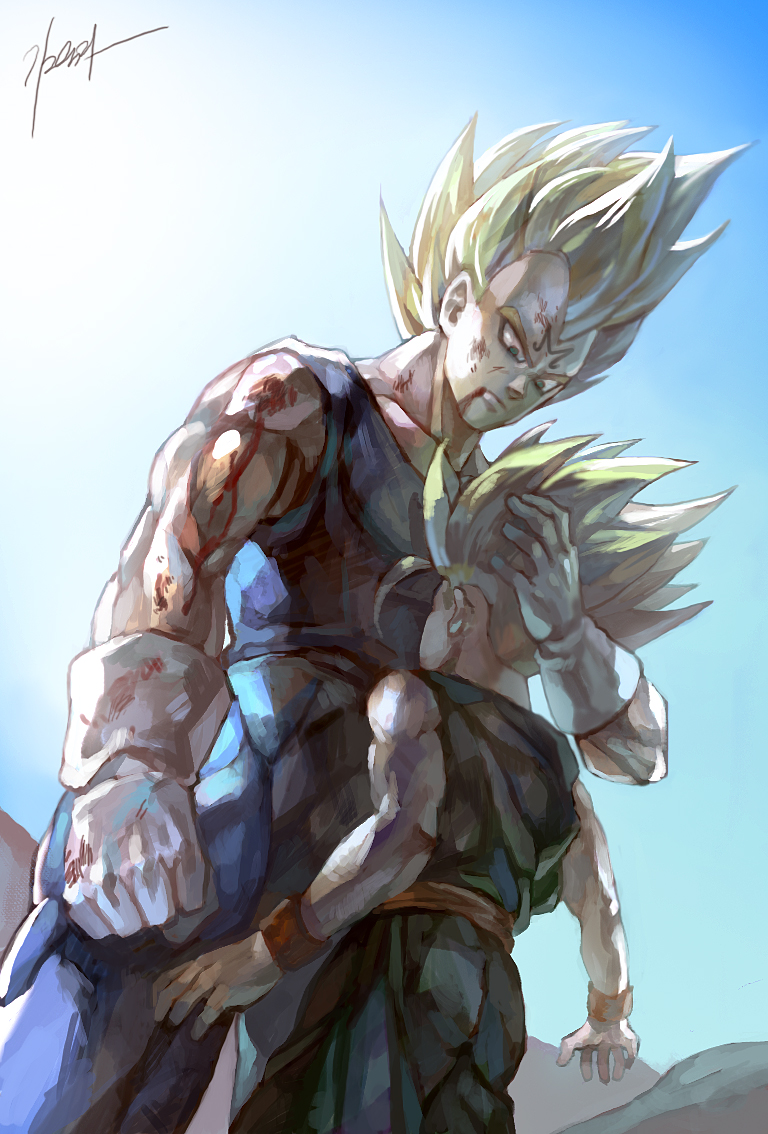 We all know that Vegeta is not into public displays of affection. So when the usually stoic Vegeta hugs his son, Trunks, for the very first time and tells him he is proud of him, it is a stunning moment that would go down as one of the most touching in Dragon Ball history. Deviantart user GoddessMechanic2’s fan art captures Vegeta at his finest hour – his turning point as a character who willingly sacrifices himself for those he loves. 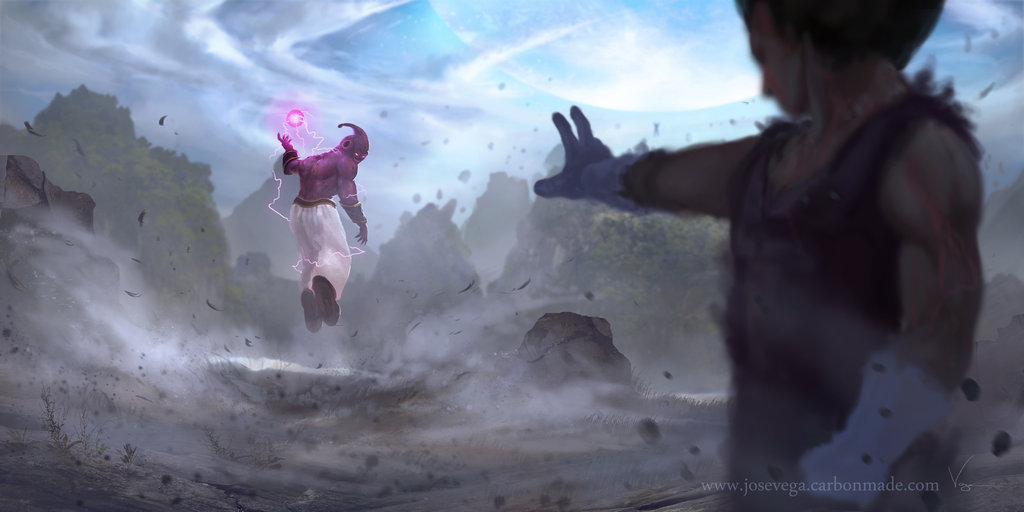 This fan art of Deviantart user artofjosevega just crackles with energy in its depiction of the fight between Majin Buu and Vegeta. It is brilliantly composed, making great use of angles and perspectives to draw in the viewer. And even though it is Majin Buu who is in focus, Vegeta in the foreground steals the scene with the strength of his presence and the determination in his pose. 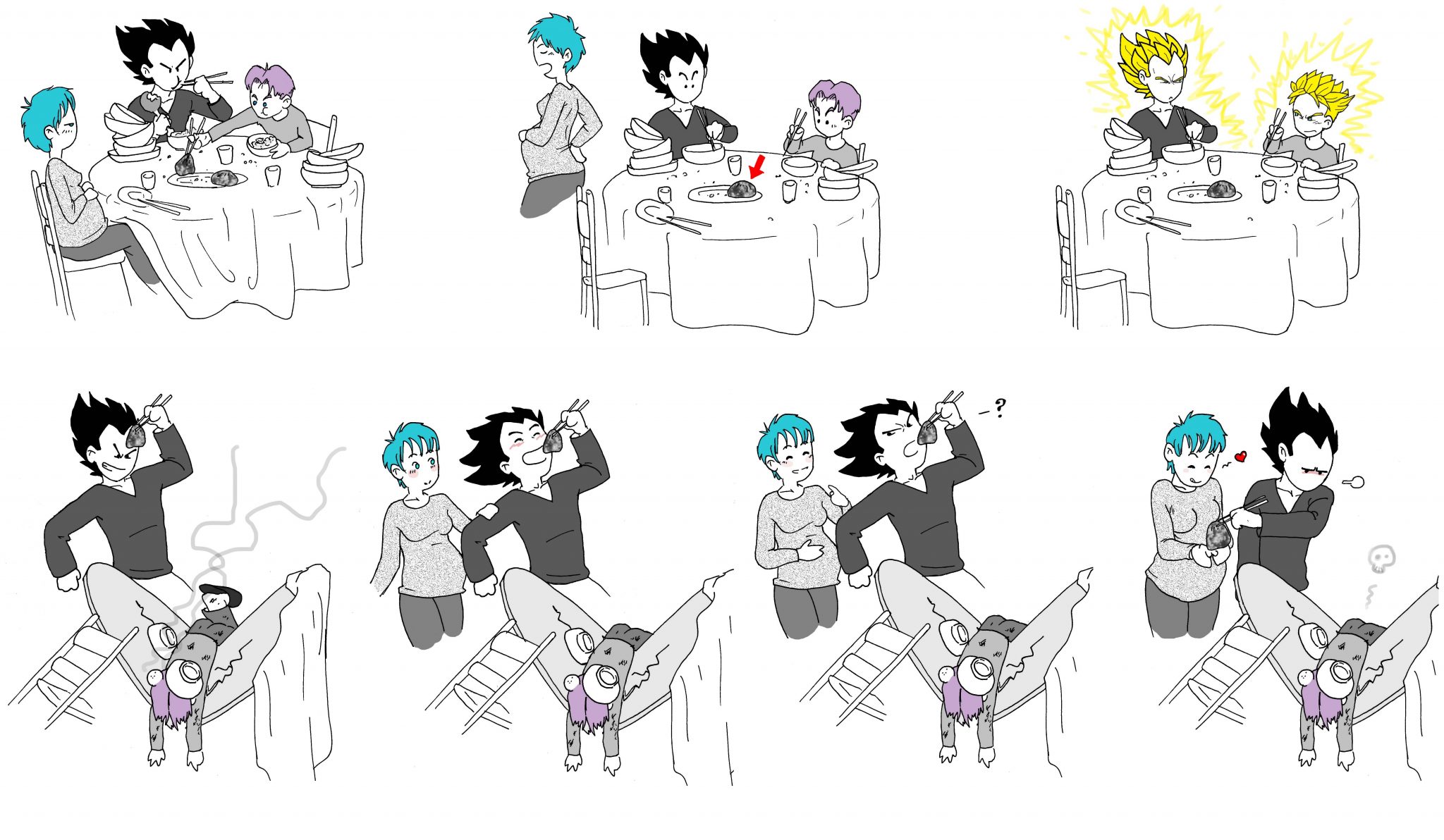 PetiteNeko’s fan art is a fun little reel that shows Vegeta just chilling with Bulma, and fighting Trunks over the last piece of dinner. And since we rarely see him without armor or not fighting, it’s an enjoyable glimpse into the many possibilities of what can happen behind the scenes. 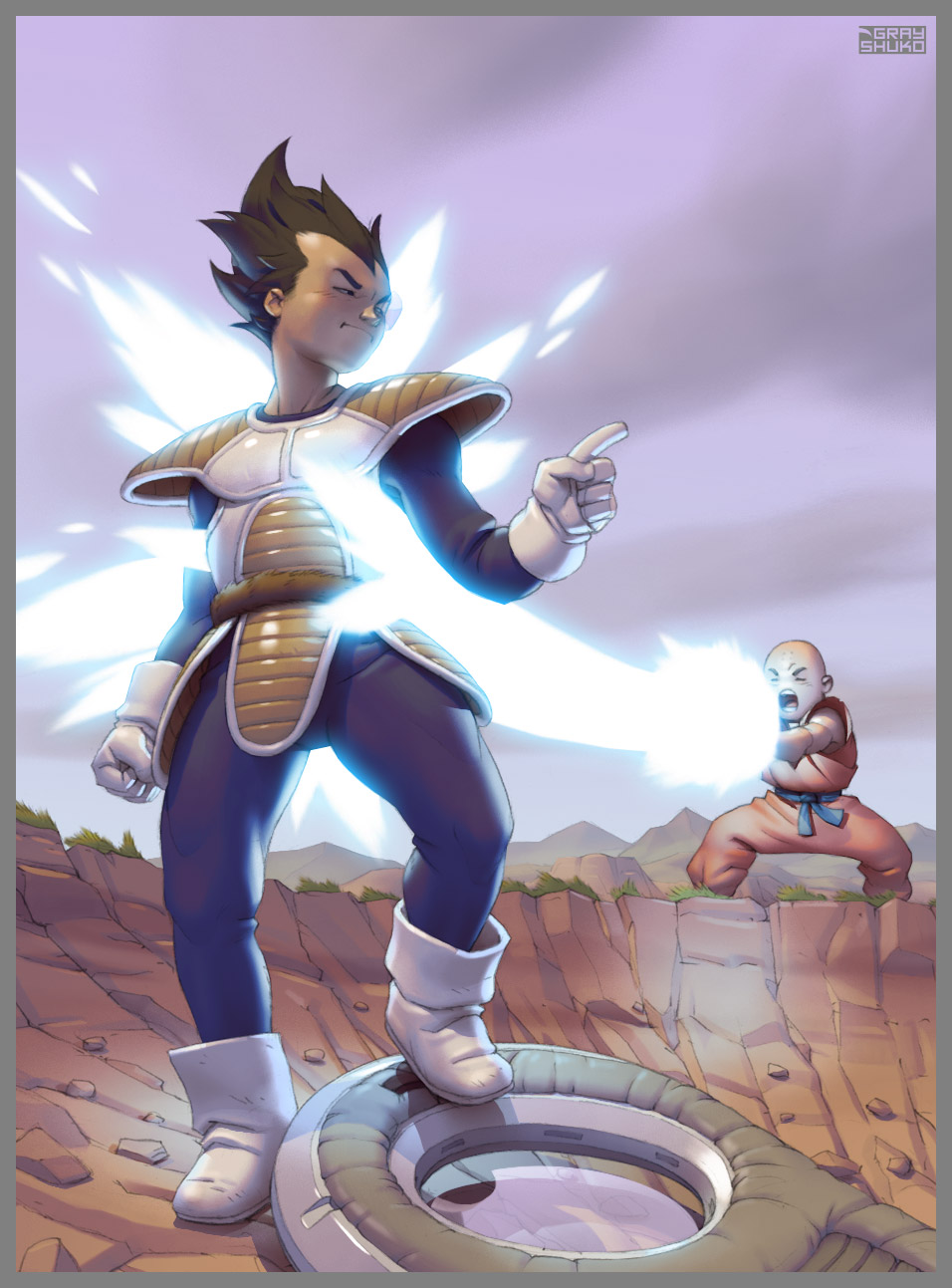 Artist GrayShuko renders perfectly Vegeta’s smug expression of superior arrogance in this fan art. It’s supposed to be a fight, but in this composition, you can’t help but get the impression that Krillin, in Vegeta’s estimation, is just an annoyance that he just can’t be bothered with. 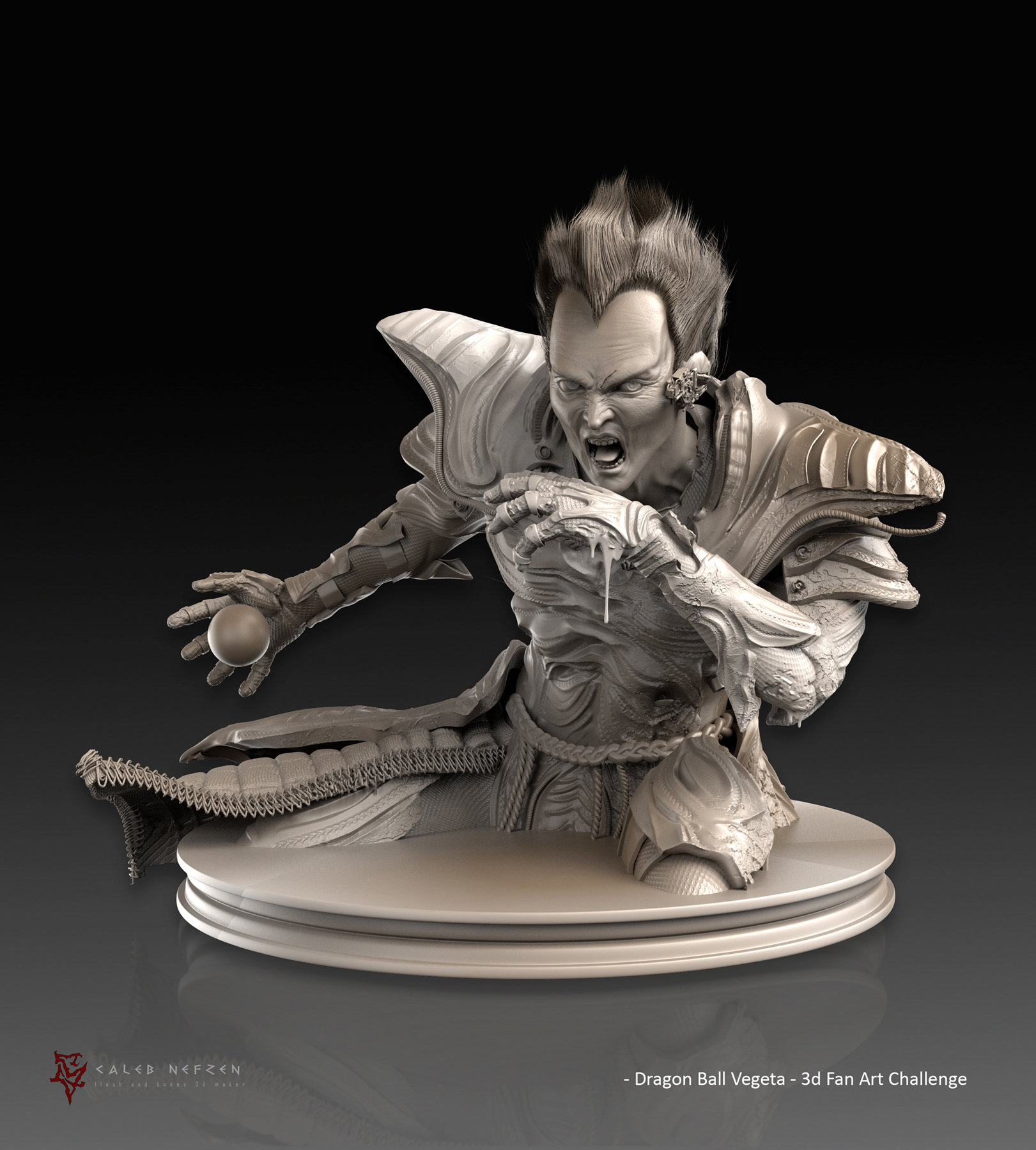 Severe, almost to the point of being feral, Caleb Nefzen’s 3D fan art is a Vegeta that we have never seen before. It is one of few fan art sculptures of Vegeta that is wonderfully made – a cross between Christopher Walken and Ryuk of Death Note fame, it emanates a raw menace that reminds us of the underlying violence that used to characterize Vegeta when he was still Frieza’s minion. It’s also a bit unsettling, seeing a Vegeta who seems to be completely unhinged.