We rated the 13 best Piccolo action figures of all time. Here's what we came up with... 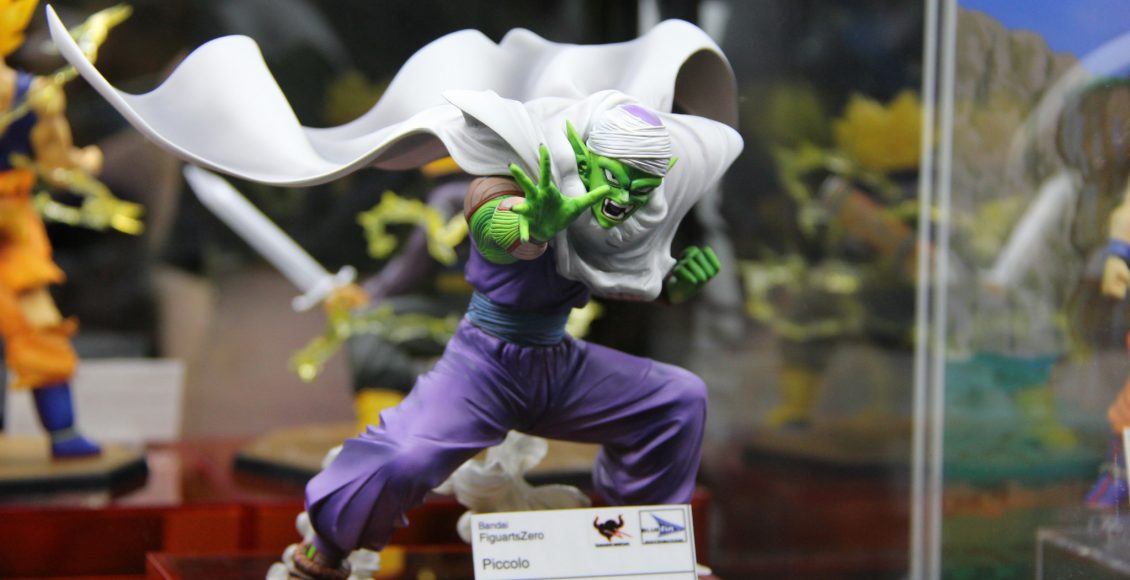 We’ve talked about the best Dragon Ball Z action figures you can buy for your collection. This time, we turn our focus to our favorite grumpy green Namekian uncle, Piccolo, and his line of action figures. From the bad and the good to the super deformed cute ones, we’re here to see which Piccolo is worth the space in your collection.

Like everything Dragon Ball Z, there are a lot of Piccolo action figures – authentic and bootleg alike – to go through. According to one count, Piccolo has some 600 collectibles under his name released by different companies and manufacturers, and while this means there’s something for everybody, it is also quite the challenge to get started.

Piccolo is such an iconic character with a distinctive design, so for us, accuracy and craftsmanship counts for a lot when buying a Piccolo action figure – actually, any action figure for that matter. Does the action figure remotely resemble a Namek? Is it actually green? These are pretty important questions to start off with when in the market for Piccolo collectibles.

Articulation also matters to us because what’s the use of an action figure if you can’t pose it? Piccolo is known for his crossed-arms glower pose – so an action figure worth its salt should be able to do this and more. Parts and customization – different faces and expressions, additional costume pieces – are also added bonuses.

Then there’s accessibility, or how easily you can get your hands on an authentic figure sans hassle and sacrifices to the sun and moon.

All these things – that’s a lot of consider so we’ve gone ahead and compiled a list of our favorite and what we believe are the best Piccolo action figures, rated according to staff preference.

Tiny but highly stylized and dynamic, this Piccolo figure packs a lot of punch in that 1.5 inch body. It lacks the poseability and presence of most Piccolo action figures, and the small size does take a bit out of the detailing and colors, but we think it would make for a great little DBZ collectible to display or to add to your collection.

Piccolo comes in with a display rod and stand which you can set up by itself or pose with the other collectibles from the Dragon Star Nano line and its diorama sets.

The Dragon Stars Nano Piccolo figure comes paired with a Rose Goku Black miniature at Amazon, and at $9.99, that’s a pretty good deal. We give this collectible 2 out of 5 stars.

If you want a cutesy Piccolo to serve as a tabletop inspiration, we recommend the Funko Pop Piccolo collectible. It comes in at 3 ¾ inches, well-sculpted with a very prominent furrowed brow that brooks no argument that this Piccolo is both angry and very cute.

It’s a fun little collectible that any DBZ fan would love to have so we’re giving this one 3 out of 5 stars.

Get the Funko Pop Piccolo at Amazon here

Banpresto’s 2.8 inch action figure packs all of Piccolo’s menace in one small package. Make no mistake though – it may be a stylized action figure but it still has that patented death snarl that we all know and love. We love a good Piccolo glower, and this action figure delivers that. We do wish for some articulation and for the action figure to be able to stand on its own, but other than that, this one’s a keeper and it’s a 3 out of 5 stars.

You can find this Piccolo World Collectable Figure at Amazon here

Piccolo looks absolutely cool in his Special Beam Cannon pose, two fingers to the forehead and cape fluttering in the air. This action figure will be available on May 2019, but we’re already itching to get our hands on it. For now, we’re giving it 3 out of 5 stars – this will probably change when we see this toy in the flesh and in action.

This Figure Colosseum 2 Vol. 2 Piccolo is available for pre-order at Ebay here

Megahouse’s Piccolo is one of the bigger action figures in the market, standing at 8½ inches. The figure’s components and accessories are made of PVC, vinyl, and fabric. It is not an action figure that can be fully articulated but it does come with a detachable cape and 3 interchangeable heads depicting Piccolo’s varying levels of scowl and ire. We rank this figure 3 out of 5 stars.

If you’re looking for a fun and compact Piccolo, Tamashii Nation’s Buddies Piccolo Action Figure is for you. Despite being small, just 3½ inches tall, this Piccolo action figure is accurate in its character details and exudes fine craftsmanship from its sculpt to the paint job at every angle.

It’s got Namekian muscles, the Piccolo glare, and the imposing stance down pat. It also comes with a stackable backdrop display of Planet Namek in a sleek black frame, so it gives a cinematic feel to the action figure which we find quaint and perfect for display. We love these little details, and so this Piccolo gets 4 out of 5 stars.

Piccolo’s billowing cape and dynamic pose gives a sense of movement even while it’s standing still on its platform. We also love the smoke effect found on this figure’s platform. This action figure comes with an interchangeable right hand to pose Piccolo in his attack forms. We give this one 3 out 5 stars.

This 6.7 inch figure, a glowering Piccolo with his signature crossed-arms pose, is a great starting point for a Piccolo collection. Made by Banpresto, this Piccolo is based from the 2015 DBZ film, Resurrection of F, and comes in four pieces – body, head, cape, and the base – which assembles and snaps into place easily. Combined, this Piccolo action figure is detailed and stands well on its base on its own.

It is a non-articulated sculpt, so it’s not poseable and is designed more as a showcase and display figure but the pose this figure is in is so iconically Piccolo that we really don’t mind. The craftsmanship of this action figure is nothing short of amazing, too. Extreme care and attention was given to the sculpting of Piccolo’s features and we like the attention given to getting the colors and shading just right. This one gets 4 out of 5 stars from us.

You can find this Banpresto 6.7-Inch Piccolo on Amazon here

This action figure is Bandai’s style of snap-fit action figure model kit and unlike the other Piccolo collectibles we’ve listed so far, this one has quite a steep learning curve especially if you don’t have any experience with building model kits.

The result, however, is a fully articulated Piccolo which you can pose and build up as you like with Bandai’s Muscle Build Up System, a system that allows layering and combining of muscle parts. Keep an eye out for the shoulder and cape area, though, as some collectors have noted it can be difficult to navigate and some pieces are a bit delicate.

This Piccolo also comes with several accessories including two faces, a cape, a pair of fisted hands, special beam cannon hands, and the beam cannon accessory itself. The fine details of this action figure combined with the fun of building model kits and the numerous options this gives you have as a builder to pose and design Piccolo earns this one 4 out of 5 stars.

This Piccolo is part of a special line of DBZ action figures released celebrating the show’s 30th anniversary, and that alone is reason enough to get this and the entirety of the collection. Sentimentality aside, the Piccolo action figure is simple yet well-made, with a fine sculpt of Piccolo’s key elements such as his furrowed brows, pointy ears, muscle striations on his arms, and his cape.

Assembly is minimal and straightforward, and in just a few moves, you will have on hand a very cool flying Piccolo with his signature crossed-arms pose. This action figure is simple, elegant, and packs plenty of sentimentality for DBZ fans in celebrating 30 awesome years of the show, so we’re giving this 4 out 5 stars.

You can find this 30th Anniversary Banpresto Piccolo figure at Amazon here.

As we said in our previous DBZ action figure review, SH Figuarts is the way to go for those starting out their collection for its accessibility and the quality of its action figures. This Piccolo figure definitely lives up to those criteria with spot-on detailing and fine craftsmanship. High articulation points in the neck, hips, and joints make possible a wide range of action poses, which makes this Piccolo one of the more popular action figure collectibles.

Hands down, you can’t go wrong with this Piccolo from S.H. Figuarts, and we give this a resounding 5 out 5 stars.

Piccolo, when he’s not glaring and scowling, has one of the most expressive faces in Dragon Ball Z as can be clearly seen here with Banpresto’s Match Makers Ma Junior. Drawing back from the 23rd World Martial Arts Tournament wherein Piccolo joined under the guise of Ma Junior, this action figure is one of the more expressive figurines that go beyond Piccolo’s usual crossed-arms pose. Banpresto here gives Piccolo a wild and dynamic pose, an expressive albeit, bewildered look, while in a mid-air jump. You can also pair it with the Match Makers Son Goku for double the fun.

Honestly, we don’t need any articulation or added accessories with this action figure, it’s already so fun and entertaining to display by itself. We love that it goes beyond the usual stoic Piccolo pose that we see in most of Piccolo’s line of action figures. And we have to say it again – this is such a fun action figure to have and we give it a 5 out of 5 stars rating. Highly recommend.

Get your Match Makers Ma Junior at Amazon here

Our absolute favorite Piccolo action figure is Piccolo at his rawest! Eyes wide, teeth bared, and arms outstretched to protect Gohan from Nappa, everything about this action figure is perfect and absolutely stunning – the coiled energy in its pose, the dramatic and expressive face, and of course, the nostalgia it manages to evoke by harkening back to Piccolo’s iconic scene of sacrifice.

There’s no articulation or accessories that comes along with this action figure but we ask you, do we even need those in light of all this epic gloriousness? Nope, this Piccolo we take home as it is. Straight up, this one’s a 5 out of 5 stars in our books.

Get the SCultures Big Budoukai 7 Vol.6 Piccolo Action Figure at Amazon here. Don’t worry, we won’t tell anyone if you shed a tear or two while doing it.

We love all these Piccolo action figures. Do you have these in your own Piccolo collection? Let us know in the comments below.

This Symphony Plays The Original DBZ Soundtrack for Live Audiences