9 Reasons Bulma Loves Vegeta: How to Woo a Woman Like a Saiyan Prince 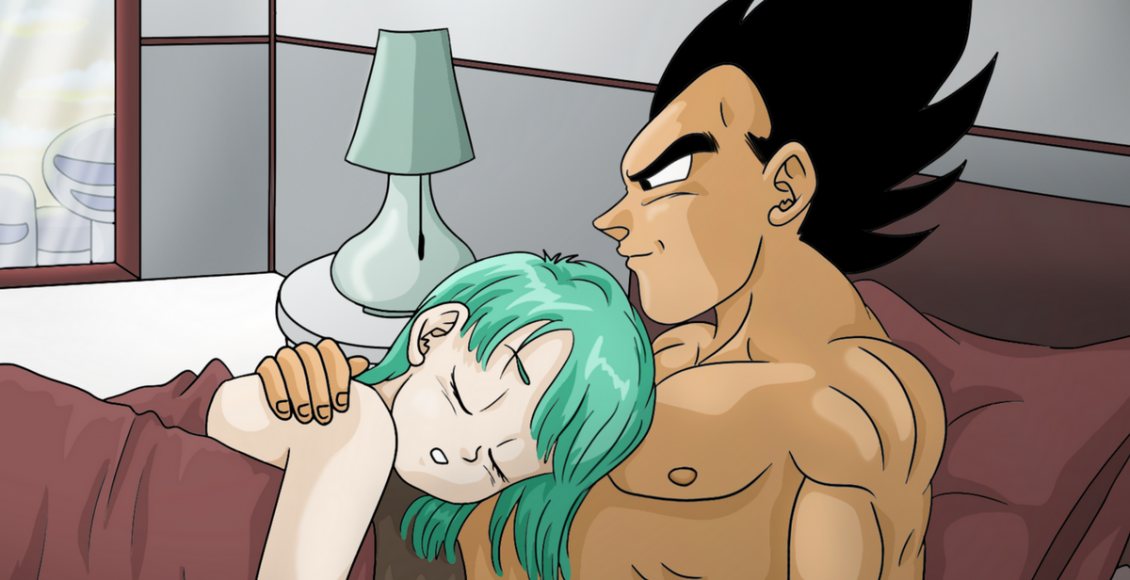 Why does Bulma love Vegeta? He’s gruff, constantly angry, and tough as nails. Vegeta at first glance does not inspire romance or affection. Despite this, Vegeta is one half of the power couple taking the Dragon Ball fandom by storm right now because he does something unexpected and totally out of character in the name of love.

Give up his training? Get out of town.

Vegeta trains. Like, a lot. That’s what he does. Part of this fanatic devotion to becoming physically stronger is because of his Saiyan nature, but it is also driven by his desire to be the best and surpass his rival, Goku. So when he comes off the Buu Saga with the knowledge that Goku is the stronger Saiyan, there’s no doubt that going back into that gravity room is foremost in his mind.

Nothing and no one can make him stop training. Except his pregnant wife, that is.

In Episode 77 of Dragon Ball Super, we get the surprise of our lives when Vegeta turns down an opportunity to train under Whis alongside Goku because he wants to be with Bulma when she gives birth to his second child.

This is just one of the many Vegeta and Bulma moments that has made this pairing  – a pairing that nobody saw coming, least of all Vegeta – one of the most enduring in the Dragon Ball universe.

But how did this villain end up with the girl in the first place? Take a peek at Vegeta’s romantic repertoire to learn a thing or two about wooing ladies the Saiyan way.

The way to any person’s heart is through their stomach. It’s a little adage that Vegeta has probably never heard of, but as someone who has a prodigious appetite, Vegeta can certainly appreciate how food can be translated as a gesture of affection, care, and love.

Not only does Vegeta know Bulma’s comfort food (it’s instant ramen, in case you’re wondering, and apparently, Bulma can’t go a week without eating it), he also knows how to prepare it. Sure, it’s just hot water and seasoning, but this is Vegeta. Preparing a cup of instant ramen is an act of great affection.

#2 He Concedes To Bulma’s Wishes Once In A While

Vegeta makes it a point to be stubborn to everyone, more so with Bulma. Most of the time, their conversations is composed of Vegeta brusquely disagreeing with Bulma on matters ranging from the important to the trivial.

But in time, Vegeta has learned how to bend, conceding to Bulma’s requests and demands every now and then. He does so even if it costs him his pride – like the time he wears the pink Badman shirt. Now, that’s love.

Vegeta tolerates – barely – a vacation with Bulma and Trunks. Despite his yearning to go back to his very own Capsule Corp-customized gravity room, he sticks to the vacation itinerary, doing normal family-oriented activities with a scowl on his face.

He doesn’t last the entire day, of course – he leaves after a crowd of party people calls him old man – but what’s important is his willingness to carve out the time and do something that he doesn’t enjoy because it means something to his wife and son.

#4 He Protects And Stands Up For Her

He may not always be emotionally available, but Bulma will always have Vegeta’s immense power and physical prowess to protect her. Vegeta is a supremely physical man, and fighting and hand-to-hand combat is a language that he is fluent in. Using his body and his knowledge in the art of war to protect Bulma is not just instinct and conditioning; it is how Vegeta shows his love and affection in the best way he knows how.

Vegeta is extremely protective of Bulma, doing everything he can to shield her from physical harm. He has no qualms getting beaten down by Beerus, but Bulma is another matter. He throws his away his pride, and even goes as far as begging Beerus to spare Bulma.

But when Beerus does hurt Bulma, the gloves are off because nobody – not even the god of destruction – can hurt his Bulma.

#5 He Keeps Their Relationship Private

Vegeta keeps his private life private. Much of his and Bulma’s relationship happens off-screen, and the bond between them is made all the more authentic and stronger because we don’t get to intrude upon it with the weight of our expectations.

Relationships are hard work, more so if it’s placed on public display. With Vegeta and Bulma, they have their own private world where they are free to give their relationship the time and attention it needs without the pressure of society butting in and telling them what to do.

Vegeta is not afraid to rile Bulma up. He does not handle her with kid gloves but instead, he gives as good as he gets. And because their interactions often end up as arguments and shouting matches, theirs is a relationship that never runs out of steam. There’s no boring moment when you have two individuals who are as passionate for what they believe in as Vegeta and Bulma.

The fact that Vegeta is not afraid to be loud and angry in Bulma’s presence also demonstrates his trust and confidence in her. He knows Bulma is strong enough to take all his blustering – his woman is a woman who will not break.

#7 He Treats Bulma As His Equal

Vegeta doesn’t treat Bulma any differently from the way he treats Goku. This does not seem so encouraging until you realize that Goku is the one person that Vegeta respects, and that in treating Bulma no different, he actually puts her in the same level as a full Saiyan warrior. Bulma is strong-willed, and Vegeta grudgingly admits that it’s something he doesn’t dislike.

Vegeta is often at odds with Bulma but the one thing he isn’t is indifferent. He is always engaged when it comes to Bulma, which tells us that Bulma, in his eyes, is his equal and worthy of his time.

#8 He Doesn’t Try To Change Bulma

Vegeta also takes great pride in Bulma’s physical strength, and he is not afraid to show the world that his partner can pack a mean slap. When Goku inadvertently insults Bulma, Vegeta encourages Bulma to practice her slapping on Goku. That’s how you support your partner’s goals.

#9 He Considers His Family His Team

There is something to be said for Vegeta in treating his family as his team. He trusts them to be battle-ready at a moment’s notice. Given his stance on training, we can imagine that Vegeta’s household is one that is disciplined and tempered with formality and rigidity. After all, Saiyans are not known or renowned for familial attachments, and have no notion of romance or marriage.

For Vegeta to care and recognize his family as his own to care and to protect (and occasionally bully), is a big thing. While the way he loves and sees blood-relationships is not perfect, there is genuine care, respect, and affection in how he interacts with Bulma, Trunks, and later, Bra. This is something that gradually developed over time, culminating in his willingness to sacrifice his life for them.

Vegeta has come a long way since his early days as a villain who cared for nothing other than his pride to the guy who shows affection (while wearing the stoniest expression possible) and stays behind for his wife. With Bulma, he learned to value family and emotional attachments as a source of strength and purpose, and he became a better and stronger person for it.

Why Is Gohan So Weak? Everything You Need To Know About His Journey From Hero To Zero And Back Again